Given a spatial unit over the earth’s surface, which is variously known as catchment or watershed or basin, how incident rainfall becomes runoff at the catchment’s outlet — is probably the most fundamental question to a hydrologist. Hydrologic models (aka Rainfall Runoff Models) are the main tool that has been used by the hydrologists to answer this question quantitatively. A rainfall-runoff model is a simplification of a complex, non-linear, time and space varying hydrological process reality.

Over the years many types of hydrologic models have been developed and have been applied to various use cases. In a recently published work by Peters-Lidard et al. (2019), this development has been nicely captured and categorized into following six eras, as depicted in Figure 1.

The development of the Hydrologic Modeling Center’s  Hydrologic Modeling System (HEC-HMS) started in the beginning of the Geoscience Era and it is still continuing in the current Co-evolution Era. The HEC-HMS is designed to simulate the precipitation-runoff process of dendritic watershed system. HEC-HMS is applicable for a range of spatial scales such as large river basin water supply and flood hydrology, and small urban or natural watershed runoff. For over last 30 years HEC-HMS has been used for various types of studies like water availability, urban drainage, flow forecasting, future urbanization impact, reservoir spillway design, flood damage reduction, floodplain regulation, and systems operation (see HEC-HMS’s online user manual).

HEC-HMS also has the capability of detailed representation of the sub-surface hydrologic processes and thereby also suitable for continuous simulation of rainfall-runoff process for the land cycle part of the hydrologic cycle. This article is intended as a concise primer on the continuous simulation of rainfall-runoff process for a general practitioner in the field of hydrology. The particular version on which this article is HEC-HMS 4.2.1.

In HEC-HMS all modeling components are organized under a modular structure called “Project”. A project may consist of (up to) following six interdependent modules (sub-structures):

Workflow of Procedures for a Typical SBE

Once a SBE has been set in the Basin Model, HEC-HMS GUI let the modeler associate it with five interconnected computational procedures. If we view these five interconnected set of procedures as a system, then PCP and PET at the sub-basin unit scale are the inputs to this system and discharge or flow (Q) at the sub-basin unit’s outlet is the output from the system. These five procedures are shown in Figure 2. 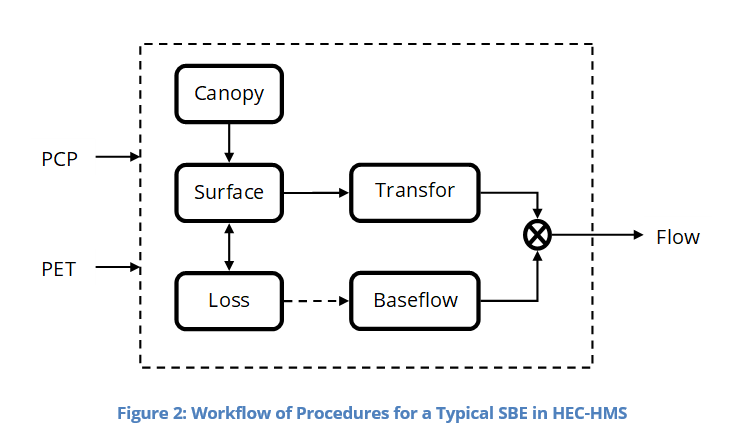 In each of these five procedures movement of water may be modeled using various Methods available within each procedure and selection of any particular Method is at the discretion of the modeler. Following list provides the inventory of methods associated with each procedure.

It is not the purpose of this document to discuss technical details of each of these Methods. Rather some of these Methods shall be examined for more detailed enquiry after establishing a pathway for continuous simulation of rainfall-runoff processes and then each of those method shall be elaborated in detail. That is the task for the Part 2 of this article.